I have heard from Ostara that they hope to publish those three Falconer titles in the Autumn.  Then all the Falconer novels will be available in one place - from Ostara Publishing.  I recently had an email from one of my fans (I do have some!) expressing confusion over the arrival of Saphira Le Veske in 'Ritual of Death'.  There is a reference to her meeting Falconer earlier, but the previous novel - 'Great Beast' - does not mention her.  I was glad to clear up the apparent anomoly.
You see, there was a real-time gap between the two novels and in the mean time I was writing stories that appeared in the Medieval Murderers' books.  I always kept chronologically accurate, and in the anthology called 'House of Shadows', published in 2007, there is the story of Saphira's first meeting with William at Bermondsey Abbey.  When I later wrote 'Ritual of Death', Saphira already figured in his life.  I guess I should have made it clearer with a reference to the incident in the MM story!
My time recently has been somewhat preoccupied with my am-dram pursuits.  I was directing the famous farce by Noel Coward, 'Blithe Spirit'.  It was hard work as Coward's dialogue is so precise and wordy - tough for the actors. But we came up with a good production in the end, and had 91% ticket sales. 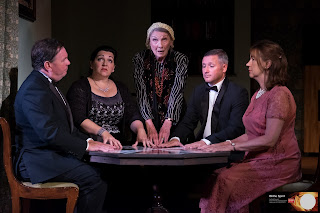