I have just spent two weeks of evenings buried in the dark of a theatre.  My favourite pastime is amateur drama, and recently the theatre I am involved with had a blank space due to an illness of a member of the cast of a play in rehearsal.  It was decided to revive a production of "The 39 Steps", last put on a year ago, to fill the gap.  From a standing start to first night took just over a week, and I was working backstage changing the set.  It is an hilarious spoof of the film and book, and involves lots of quick scene changes, so I was very busy along with the rest of the crew.  All the many parts are played by only four actors, who worked their socks off to put on an amazing show.
One of the actors is also the author and composer A K Benedict.  We know her by her real first name, but as there is another author with the same name, she goes by the initials A K as a writer.  She has written a lot of great material, but her first full-length novel is due out Feb 2013 from Orion.  It's called "The Beauty of Murder".  Look out for it, buy it, read it and enjoy. 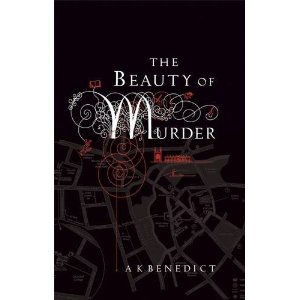 Email ThisBlogThis!Share to TwitterShare to FacebookShare to Pinterest
Labels: a k benedict, drama

I will shortly be coming to the end of my first draft of the ninth William Falconer book.  The first one was published in 1994, but I started writing it long before that.  Perhaps as early as 1990.  So I have been living with William for 22 years, and for the life of me can't recall how I came about his name.  I think Falconer was just a wry comment on the fact he was going to be short-sighted, and William was an arbitrary choice.  Imagine my surprise then, when I was working on some family history and discovered that my great-great-great-great-grandfather was called William Faulkner!  OK, it's not quite Falconer, but it's close enough to raise the hairs on the back of my neck.
My ancestor William was not an Oxford master however.  He was a sawyer, who was born, lived and died in Derby.  His daughter Mary married a Stevens, and their daughter married a Brownhill (a family of people who ran narrowboats on the canals of England).  Their daughter married a Withey (another family of boat people), whose daughter married a Lear (not King Lear!), whose daughter was my mother.  I would love to hear from anyone who thinks they are related.  In the mean time, I ponder on the possibility that William Faulkner/Falconer had always been lurking in the back of my mind somehow, just waiting to come out.
Posted by Ian Morson at 11:11 No comments: