Happy New Year, everyone who reads this blog...and to everyone else who doesn't!  Last year, my agent and friend, Dot Lumley died.  I sincerely hope better things will happen this year.  She was someone who kept me on the straight and narrow - from a writing perspective - and was always optimistic about my work.  Without her, some of the later Falconers would not have come about, so I have a lot to thank her for.  I am now beginning to plan out the full-length Georgian novel I have been thinking about.  Using my characters from short stories - Joe Malinferno and Doll Pocket - I will start what I hope might be a new series taking them through the events of the 1820s in England, and off to Egypt in pursuit of their interest in all things Egyptian.  The life of Giovanni Belzoni will be my guide to the times and the place.  A real-life (even larger-than-life) character, Belzoni was responsible for bringing some of the first artefacts to England from under the noses of the French in Egypt.  In return he was poorly treated, perhaps because he was not a gentleman, and a foreigner to boot.  He died in Africa, searching for Timbuktu. 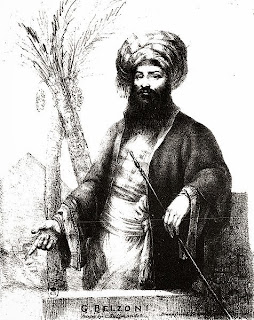 This year heralds the arrival of the tenth Medieval Murderers book "The Deadliest Sin".  Tales of the Seven Deadly Sins are swapped by pilgrims in Norfolk, as they vie to claim the deadliest of them all.  Look out for it.  Plans are afoot for the next book.
That's the new year for me as a writer.  My enthusiasm for amateur drama will also take up some time, as I will be acting in a play at the Stables, Hastings in March, and directing in May.  I also have the trip to our 'sister' drama group in Chicago coming up in June.  Lots to look forward to in 2014.