"Falconer and the Rain of Blood" is now available to order in paperback, hardback, or ebook from Ostara Publishing.  I am proud to say that it is the first in a new series for the publisher called Ostara Originals. As well as being a first, the story is also a last - the last Falconer.  I could not go on killing people off in Oxford, and William was getting a little bored with his life there.
Having found the love of his life in Saphira Le Veske, it would have become difficult for them to live openly as they would have wished.  It was not permitted for a Jew and a Christian to have any sort of relationship at the time.  Their decision to to travel to the ends of the Earth was therefore not a difficult one.  Since meeting the Mongols in "Falconer and the Great Beast", William had a desire to see their great empire.  Their travels will thus take them as far east as it is possible to go.
Anyone eager for news of what happened to them will find a nugget of information in one of my new Medieval Murderers stories contained in the book "Seven Deadly Sins".  One of the storytellers in the book goes by the name of David Falconer, an old man of 72 in 1348, who therefore must have been born in 1276.  This was shortly after William and Saphira left England, of course.  Unfortunately, the reader will have to wait until next year (2014) for "Seven Deadly Sins" as it is the Tenth Anniversary Edition of the Medieval Murderers series of books.  In the mean time, content yourself with the ninth in the series - "The False Virgin" (Simon and Schuster, 2013).
Oh and did i say that "Falconer and the Rain of Blood" can now be ordered from Ostara Publishing? 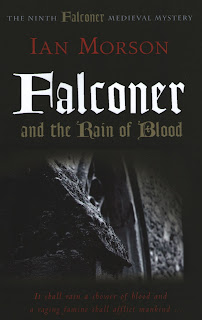